ERIN TACKLES THE MOUNTAINS WITH MAHINDRA

Living in Toowoomba atop the Great Dividing Range, Erin Flemming bought her Mahindra XUV 500 AWD so she could better tackle the mountains – but not in the way you might think.

“I used to have a two-door 4WD,” said the 22-year-old hairdresser, “and I couldn’t really fit my mountain bike comfortably in the back, so I said to Dad, ‘I need a bigger car that fits stuff in’.”

Not only had Erin never driven a Mahindra before, she’d only heard of their utes. “It was dad that convinced me to check it out. He is good mates with the Mahindra dealer in Toowoomba, Russell Hughes.

“So Dad & Russell found me a Mahindra XUV500 SUV and it was a really good deal – not expensive – and I went for a drive and it sold me! Like any girl we sort of fall in love with anything that’s new, but this felt good and powerful and it is sturdy. I like the turbo, there’s a bit of a kick to it and I love it!”

“It’s really good on fuel,” says Erin. “And it shows you on the little dash screen how many kays you’ve got until empty, but it also tells you your average fuel consumption rate in kilometres per litre. I did a lot of highway driving over Christmas and I was getting 17.7 kilometres per litre. I told dad and he was like ‘What?’ That was double the amount his car does. So I don’t have to fill up that often. Around town it’s probably like high 14s, nearly 15. But that’s just driving in Toowoomba; it’s a small city. I’m only doing 15 min trips.”
“I definitely like the manual transmission, I prefer that over an automatic because it doesn’t use as much fuel and I feel more alert with my driving.
“Mums car is an auto, and when I jump in that it feels like it just bogs down when you put your foot on the pedal. You can’t rev it real high.” 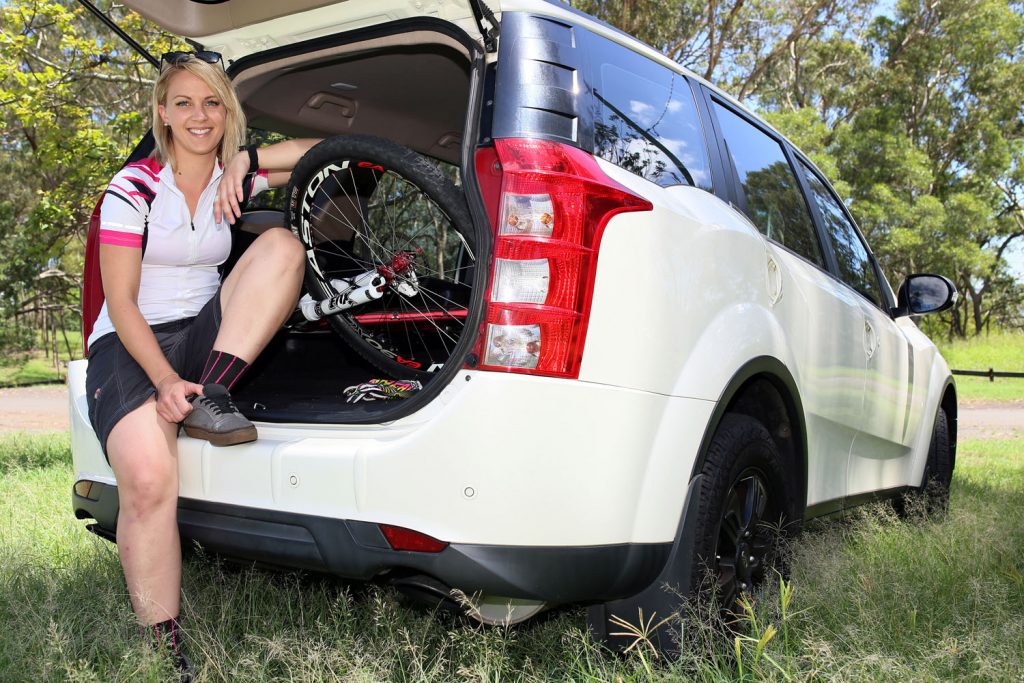 The Mahindra XUV500 features a monocoque construction which provides good feedback for driving, particularly on the roads and often hard to get to mountain bike tracks. The sporty McPherson strut front and multi-link rear suspension have been tuned in collaboration with Lotus, a world renowned name in motorsport. There’s also an intelligent All Wheel Drive with Interactive Torque Management system, which seamlessly redistributes the torque between the front and rear wheels, as needed.

“I like the handling,” says Erin. “One thing I really do like about it is the fact that even though it’s like a huge car on the inside, it doesn’t feel like one. It’s got a really good turning circle I didn’t have to change my driving in going from my old RAV to my Mahindra. I can still do a U-Turn in a small street without having to do a three-point turn.
“The only off-road driving I’ve done has been a little bit of dirt road at the mountain bike races, so I can’t talk too much about that, but the feelings have been good so far.”
“Infact it’s very comfortable. I really like the seats,” says Erin, of the XUV’s 6-way, adjustable driver’s chair. “You can jack it up real high if you’re short and unable to see over the steering wheel. I like that.

“It’s a seven seater but there’s just me so I usually keep the back two seats folded down, or fold the centre two and instead put the bikes in there. With over 1500 litres of volumetric space with two rows folded flat and over 700 litres with the rear row folded, there is plenty of room for mountain bike kit in the Mahindra XUV500. “The nice thing is that the second row has 60/40 split, so even if I have 2 or 3 passengers, I can still fit our bikes and my friends as well.” Says Erin.

“My favourite feature though, would be the touch screen in the dash. It’s very easy to use, and has got Bluetooth in it along with a function for a reversing camera.

Buying a seven-seat AWD was always going to draw some friendly sledging from her circle of friends and Erin was duly ribbed. 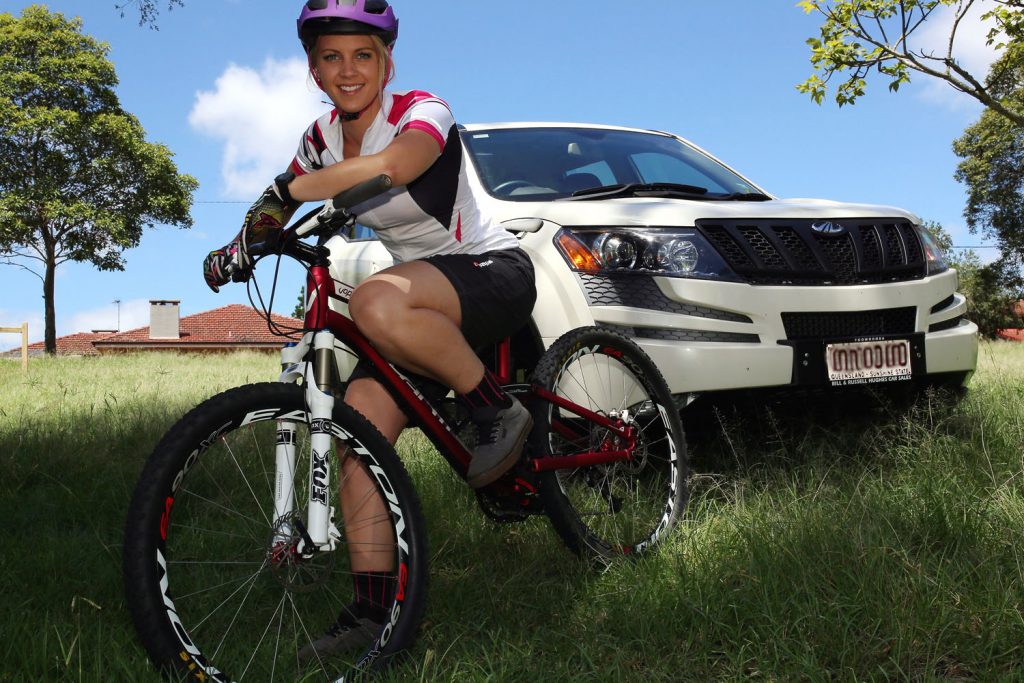 “At first I got teased for buying ‘a family car,’ ” laughs Erin, “but now they know it just means that I can drop six people down town on a Friday night! None of my friends had heard of Mahindra earlier, but now they seem to like it. They think it looks nice.

“I like its looks too. I love the door handles, they’re vertical, which is pretty cool. And I like the black pillars between the Windows, which I reckon looks really modern and matches really well with the polished black wheels that I’ve got on mine too.”