I LOVE MY GENI-O YEAH

They say when it comes to cars, everybody is an expert, but unlike your typical punter, Toowoomba Genio owner Rick Mules is a guy who gets paid for what he knows about vehicles and their operation, and has done for years.

The 59-year-old former Air Force Vehicle Instructor still works full time with vehicles, though nowadays it’s as a Greyhound Coach driver on the Toowoomba to Grafton run, or sometimes out west to Miles.

So when Rick sings the praises of the 2016 Mahindra Genio he bought himself earlier this year from Toowoomba Mahindra, it’s a tune worth listening to.

“My first Mahindra was a second-hand Pik-Up 4wd,” says Rick, “and I liked the way it drove and everything else. The funny thing is, even though I was an instructor in the Air Force and I used to train people in 4WDing, I almost never used to put the Pik-Up in 4WD because I never needed to. I was going places where people were 4WDing, but I didn’t need to use 4WD.”

When the time came for a new vehicle, Rick bought Mahindra again, but this time it was a 2WD, in the form of the tradesman’s best kept secret – the Mahindra Genio.

“All I needed was a town ute – something that could zip along a bit easier in the faster stretches. I test-drove the Tata Xenon and then the Foton, and the difference in the driving with the Genio was chalk and cheese. The cab was a lot smaller on the others, which I noticed because I’m just on six-foot and I lean back when I’m driving. The Foton didn’t have anywhere to put my foot, so I had to put it underneath the clutch, but what I found was that the Mahindra gearbox was just so nice to drive, you just push it in with your fingers.”

“The power it has with the turbo is impressive, even though it’s only a 2.2 – it doesn’t matter because it mates so nicely to the mHawk motor. The other vehicles I tested, cut in a fair bit later, but the Genio turbo cuts in at about 1150 revs, so, just when you need the power, you’ve got it. It means that if you want to get away smoothly and or overtake somebody, it’s easy.

“The beauty I see with this vehicle, is that it would be the ideal town or city delivery type vehicle, it can go up and down hills without even noticing them, and accelerate away from the lights, so I reckon in a big city like Brisbane, it would be an efficient delivery vehicle. It’s got the speed to do it, it’s comfortable, and overall it’s just a nice little jigger to drive.”

One thing that really sticks out to fellow road users who follow Rick’s Genio, is his unusual bumper sticker which proudly proclaims in red, “I LOVE MY GENI-O YEAH!” 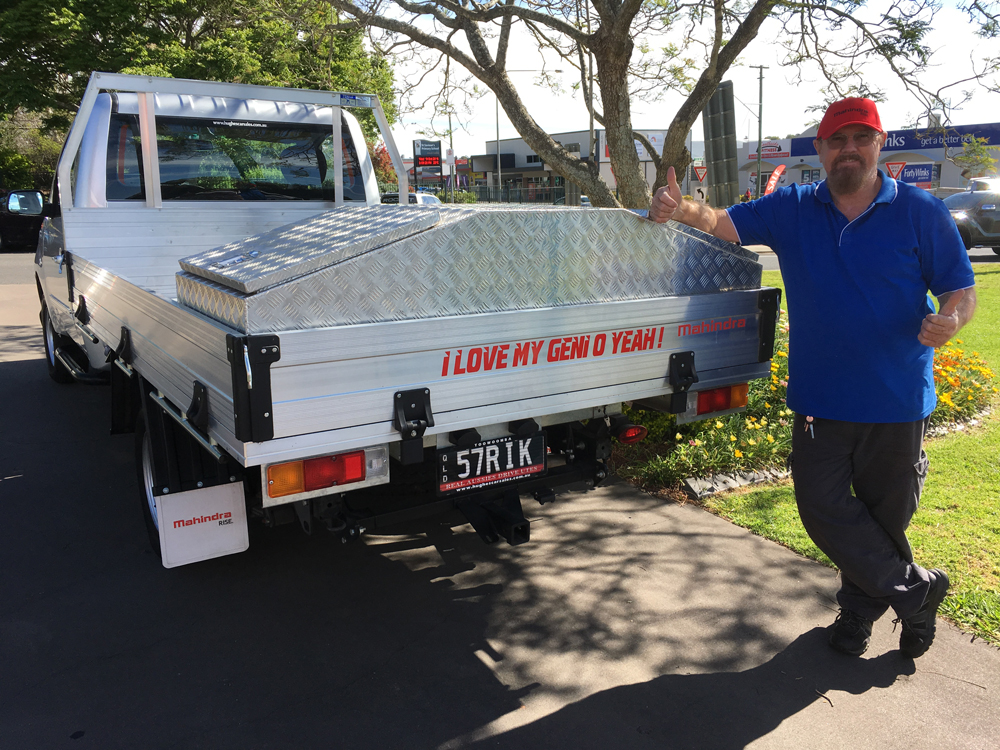 Rick laughs, “yeah I have had some people give me a hard time about my choice in vehicles, and I just say, ‘here’s the key, take her for a drive.’ Three people have taken me up on that; two took her around the block, the other rang me and said, ‘I’m going to be twenty minutes,’ I said, ‘no worries, drop some fuel in it for me will you?’ I’ve know this guy for 20 years. He came back half an hour later and he said ‘I don’t believe that thing, the hills don’t worry it.’ I was in the air force 17 years,” continues Rick, “I’ve been in transport, driving all types of vehicles, I was an instructor with everything from cars up to semitrailers, refuelling vehicles, cranes and forklifts. So I know when something’s a good vehicle.”

The Mahindra Genio is establishing itself as a modern transport solution, born of ideas to take your business places, from its 1.2 tonne payload (Single Cab 4×2) and zippy performance, to its 2.7 metre tray (nearly 9ft) and miserly fuel economy.

“Fuel wise, I’ve done Brisbane and back twice and then the wife took it to Warwick and back and did a bit of stuff around town, and I’ve just now hit the quarter of a tank – with 730 kilometres on it – so it’s not doing too bad. Combined fuel consumption is supposed to be 10.2, its average is 9.6, but on the open road it’s about 7.7.

“I’ve got a 600 mm wide toolbox that goes right across the tray, and at the moment that sits at the back of the ute and just improves the ride when it is empty, and the best bit, can you believe I can still fit a queen sized bed in the tray if I want to go camping!”