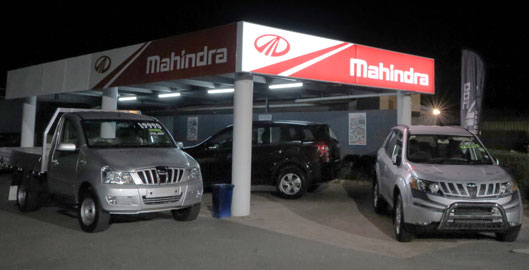 “I believe Mahindra is the sleeping giant in the market,” says Graham Booth, General Manager of Starkey Mahindra at Lawnton. “They’re priced right, and once people get to know they’re here, they’ll really go.”

As a man at the coal face of the automotive industry with a lifetime of experience, Booth is well qualified to comment.

Located at 668 Gympie Rd, Lawnton, Brisbane’s newest Mahindra dealer is a member of the Ross Starkey Automotive Group, one of Brisbane’s oldest privately owned dealerships, and one which has operated since 1970.

“There’s nothing more exciting,” says Booth, “than when a customer comes in and says ‘here’s my cousin, nephew, or friend, they want to buy a car and I recommended you.’ Repeat business is the cheapest kind of advertising you can get and both Ross and I get a kick out of that. We both are 60-odd, and we intend to stay here a bit longer because we enjoy it.”

“The Mahindra Pik-Up, I liken to the old 110, it just goes forever. They are a great vehicle for the country, for the farmers who do rough work outside. But my personal favourite is the XUV500, I drive one to work, I think they drive sensationally, with fantastic economy and a great turning circle.

“Just the way they are accessorised, from the sat nav right down to the reversing camera screen, everything’s there, not like a lot of other makes where that screen is an afterthought attached to the rear view mirror or stuck on the windscreen or the dash. Here it’s a finished item. The visibility of it too, it’s a good safe vehicle for the whole family to drive with very few blind spots in it, unlike a few of the other vehicles around.”

Starkey Mahindra has an enviable location at Lawnton, with a large amount of passing traffic and major industrial and educational developments going on in the area, combining to make it the perfect platform for the Mahindra brand.

“It’s very hard to fault the product,” says Booth. “The Indians are very proactive – any problems they’ve had with their product they’ve rectified. It’s preferable dealing with a wholly-owned subsidiary rather than just a distributor. Mahindra are a lot more responsive to suggestions as your dealing with the Factory directly – you’re not going through a third party so Mahindra doesn’t blame head office; they either say yes they can do something or no they can’t.”

Starkey Mahindra is looking forward to spreading the word to the many thousands of visitors at this year’s RNA Show (August 8-17), with a full display of 10-12 cars professionally manned at all times by knowledgeable salespeople. They are located at the Brisbane Ekka in the Royal Agricultural Association Building stand EBL 004.

“A lot of brands just have some girls handing out brochures,” says Booth, “but that doesn’t really convey the information. At the Ekka we have a lot of country people coming down to have a look, so they like to know a little bit more about it. There’s a great history of country people buying vehicles at the show, and the Mahindra 4×4 ute and the XUV500 will go great guns there.”

So after his decades in the car industry, what keeps Graham Booth enthusiastic about coming back to Starkey Mahindra?

“I love it. I just love the car industry, there’s nothing that gives you more satisfaction or adrenaline. Just that mix of people that come in, and having a talk to them. Everyone’s time-poor now, so we ask, well, what do you really want it for, would this sort of car suit you better?

“We’re also very much into training people. It gives you satisfaction bringing new apprentices through, and getting good technicians and keeping them in your team. The same with sales staff, we like to employ people that don’t have a great deal of experience and mould them to the business and get them started. We have a history of long-term staff – our spare parts manager, our Service Adviser and our Workshop Foreman have all served 14-15 years. It gives our customers confidence that we are not a fly-by-night organisation.”  This giving philosophy is also a strong part of the Mahindra brand who give back to the community in many ways in India itself by sponsoring orphans and medical facilities for the less privileged.  In Australia in recent times Mahindra have donated a Mahindra Tractor to QLD Surf Life Saving and 6 Vehicle Aggregates (Cutaway Transmissions & Engines) to Careers Australia to help train young apprentices.

Mahindra’s National Sales Manager Russell Thiele expressed confidence in Brisbane’s newest Mahindra dealer. “With the Starkey Group’s long experience and reputation, Mahindra Australia is proud to be associated with them, and has every confidence that it will be extremely successful partnership to grow our brand in Brisbane.”  Starkey Mahindra are also a dealer for SsangYong Vehicles, a company which Mahindra Group owns.

“Mahindra has a number of automotive dealers across Australia and good coverage for SE QLD, including the Gold Coast/Tweed Heads, Toowoomba, Warwick, Nambour, and now Lawnton on Brisbane’s Northside.  Mahindra are still seeking respected and enthusiastic new dealers for southern and western Brisbane that fit with our brand,” said Thiele.

In 2014, Mahindra featured on the Forbes Global 2000, a comprehensive listing of the world’s largest, most powerful public companies, as measured by revenue, profit, assets and market value. The Mahindra Group also received the Financial Times ‘Boldness in Business’ Award in the ‘Emerging Markets’ category in 2013.