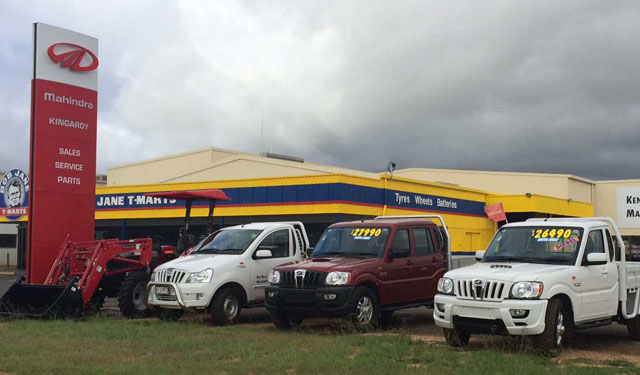 The Wide Bay Burnett region of Central Queensland will now boast two of only six dual-franchise Mahindra outlets nationwide, with the addition of well-known automotive dealer Ken Mills to the company’s line-up of dealerships.

Mills is famous for operating his family-owned dealerships for more than 20 years, and that same experience and passion will be the driving force behind Ag/Auto outlets in both Kingaroy and Mundubbera, with both locations providing sales and service of Mahindra vehicles & tractors.

“It’s early days,” says Mills, “but we’re fairly excited about it; I can see a bright future for both Ag and Auto in the region.”

Mills started in the business in the ‘60s as an apprentice motor mechanic and has been there ever since, working in almost every aspect of the car sales industry and witnessing the birth and development of Japanese brands such as Toyota – it’s given him a unique and particularly acute perspective of the things that matter in the Australian market place.

“Product and price are always important aspects,” says Mills, “but alone it isn’t enough. The thing that I look at with whoever we deal with is the culture of the company.

“Just at the moment I’ve got two Toyota dealerships, a Bob Jane T-Mart and a Stihl agency. You’ve got to be with a company that has good culture and a vision for the future. I think the thing that has impressed me with Mahindra, is that at this point the other major brands have a big head start, but Mahindra has great culture. They know where they are, they know where they would like to be, and I think they are setting about making a plan to get there.

“It’s honestly very similar to being with Toyota 40 years ago, and I have seen what that company has done just through having a good culture and I can see a similar culture with Mahindra.”

Mills believes that the area’s appetite for utes will create a receptive environment for Mahindra’s feature-packed and value-priced Pik-Up and Genio utilities.

“We’ve concentrated more on the Pik-up,” said Mills, “but we’ve actually got a Genio that we’re setting up as our own salesmen’s demo or drive car. It’s got a lot going for it with its 2.7m tray and 1.2 tonne carrying capacity, and it’s priced in a way that is going to be attractive to the Tradies and so forth. And it’s diesel.

In a location where many are still yet to hear of the Indian giant, Mills’ Mahindra franchise has generated a broad range of responses.

“I’ve had all sorts of responses, some from people who say, ‘who are Mahindra, where are they from?’, and then others from people who actually know the product. One comment was; ‘if you think a Hilux is tough, wait until you see how these things perform!’ which is pretty positive.

“And the people I’ve dealt with within the company have been very obliging, and that just makes you feel good when you know you’ve got the human support.”

Mahindra’s National Sales Manager Russell Thiele expressed the company’s excitement to be involved in the region and said: “Ken Mills’ dual-franchises will provide buyers in the Burnett region with another very worthwhile choice for their car, utility or tractor needs, and we are excited to enter into this partnership with him.”

Ken Mills Mahindra Kingaroy can be found at the corner of River Road and Bunya Hwy, Kingaroy.