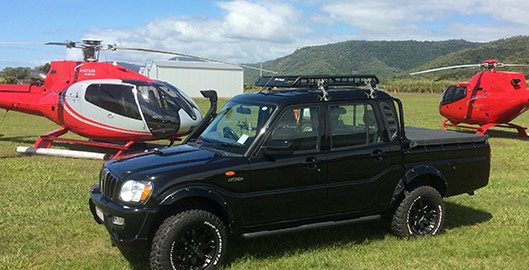 When Michael Butler, owner of television production company Sacred Oz Productions decided to return to Cape York on an important film trip, he knew the vehicle he wanted to take was a Mahindra Pik-up.
How did he know?
Because it’s the second time he’s chosen a Mahindra Pik-Up to tackle Australia’s toughest and most iconic four-wheel driving odyssey.

Sacred Oz Productions is an independent production company based in Cairns in Far North Queensland, and Michael and his small film crew including wife Samantha Martin travel to film stories for SBS/NITV (National Indigenous TV).
They couldn’t afford to take a vehicle that might let them down, so they chose the rugged dual-cab 4×4, complete with Mahindra’s torquey and economical mHAWK engine – a joint development between Mahindra and Austrian diesel powertrain engineering specialists, AVL.

Michael added a Jayco Outback camper trailer, then fitted Pedders TrackRyder Suspension and Air Assist airbags to cope with the extra weight of production and recovery gear (and caravan) along the dusty corrugated roads.
He fitted a Safari snorkel for deep-water fording as well as a dedicated Bull Bar purpose-built to eight mounting points to support his winch.
“Mahindra’s National After Sales Manager Tony Costley said this is one of the strongest bull bars Mahindra has ever made,” said Michael.
“Samantha and I wanted a little more comfort this time so we were interested to see how our Mahindra would go towing a Jayco Outback camper that weighs a little over 1200kg,”
“There were a few testing hills on the way,” said Michael, “but the torque of the Mahindra easily towed the camper up them.”
The expedition’s first campsite was at Laura, about 300km north of Cairns, and after a great night’s sleep in our camper, the team headed further north.
They passed the famous Morton Telegraph Station where J.R Bradford took two years to blaze a trail for the overland telegraph line starting in 1883. The traditional owners, the Kaanju people have spiritual sites in this vast area,that are still culturally significant to this day.
Continuing north, the expedition passed Coen, Lockhart and Weipa in order to attend and film the Thursday Island Cultural Festival.
“The roads where atrocious as it was the back end of the dry season – peak time for travelers,” said Michael. “Many fatal 4-wheel-drive accidents had occurred this year so you had to be conscious of that and slow down!”
The next stops at Elliot Falls and Fruit Bat falls along the Old Telegraph Track put the Mahindra and its new snorkel to the test in a deep water creek crossing.
“I had the water almost across the bonnet and Samantha was able to reach out and touch it!”

“Once we travelled the final 40 kilometres to Bamaga and stocked up on fuel, fresh food and veggies, we appreciated the fact that the Mahindra had been fantastic on diesel fuel, averaging about 800km on an 80 litre tank,” said Butler. “That was great, since the fuel there was $2.80 a litre!
Another 45 kilometres later at the tip of Cape York, Michael had the chance to inspect the Mahindra Pik-Up and see if the corrugated roads had broken anything.
“It turns out I’d broken my HID spotlights and had a loose wire in the taillights, but after a few quick repairs, Samantha and I could sit back and take in a sunset to live for at our campsite right on the beach, with a cold beer in hand.”
“It was time to head south and we stopped in at the famous Bramwell Junction Roadhouse for the night, and then in the morning used the Mahindra to explore some of the 15 feet tall termite mounds which populate the area.”
“The Pennefather, Stones Crossing on the Wenlock River and Cullen Bay at Mapoon are a few ideal fishing and camping spots around the area, but at The Pennefather the rangers told us to drive along the top of 9kms of bumpy, sinking, hot sand to reach the ranger station. I let the BFG Mud Terrain tyres down to 18psi but just as we arrived at the campsite, down we went… Bogged!
“The Toyota that tried to pull us out failed and it got bogged too, and then a Jeep tried, failed and got bogged also, so now there were three cars in a line trying to dig their way out…
“After letting my BFGs down to 13psi however, out jumped the Mahindra in low-range 4×4, and I was able to help out the other guys who had come to my rescue. Great Fun!
Sacred Oz Productions is an independent production company based in Cairns in Far North Queensland, that produces material for SBS/NITV (National Indigenous TV).
All Mahindra Vehicles feature a leading 3 year / 100,000 kilometre warranty with free roadside assist
Speak to your nearest dealer today to book a test drive 1300 696 244